The court will assess the nuisance according to the effect on a reasonable, rather than a hypersensitive, claimant 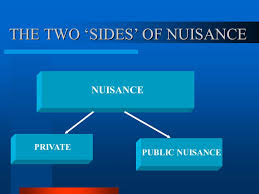 A private nuisance is usually caused by a person doing something on his own land, which he is lawfully entitled to do, but which becomes a nuisance when the consequences of his act extend to the land of his neighbour by, for example, causing physical damage. A private nuisance is actionable and a claimant can take civil proceedings against a defendant for:

A public nuisance arises from an act that endangers the life, health, property, morals or comfort of the public or obstructs the public in the exercise or enjoyment of rights common to all. A public nuisance is actionable in tort and can also be a criminal offence.

“On a private nuisance claim, the question whether a particular activity caused a nuisance was to be assessed by what, objectively, a normal person would find it reasonable to have to put up with, given the character or established pattern of uses of the locality in which the activity concerned was carried out. A defendant could rely on his own activities as constituting part of the character of the locality, but only to the extent that they did not constitute a nuisance. If his activities could not be carried out without creating a nuisance, then they would have to be entirely discounted when assessing the character of theneighbourhood.

The mere fact that the activity which was said to give rise to the nuisance had the benefit of a planning permission was normally of no assistance to the defendant. There would be occasions when the terms of a planning permission could be of some relevance in a nuisance case, as where the planning authority had taken the view that noisy activity was acceptable if limited to a certain decibel level in a particular locality. That might be of real value, at least as a starting point, where the claimant was contending that the activity gave rise to a nuisance at or below the permitted decibel level. It followed that the existence and terms of the permission were not irrelevant as a matter of law, but in many cases they would be of little, or even no, evidential value, and in other cases rather more.

Where a claimant had established that the defendant’s activities constituted a nuisance, prima facie the remedy (in addition to damages for past nuisance) was an injunction to restrain the defendant from committing such nuisance in the future. However, the court had power to award damages instead of an injunction in any case, including nuisance. In Shelfer v City of London Electric Lighting Co [1895] 1 Ch 287, 322-323 AL Smith LJ said that damages might be awarded if the injury to the plaintiff’s legal rights were small and capable of being estimated in money and adequately compensated by a small money payment, and the case was one in which it would be oppressive to the defendant to grant an injunction. But Shelfer had not to be a fetter on the exercise of the court’s discretion. It would, in the absence of additional relevant circumstances pointing the other way, normally be right to refuse an injunction if those four tests were satisfied.

But the fact that the tests were not all satisfied did not mean that an injunction should be granted. Other factors were relevant. The fact that a defendant’s business might have to shut down if an injunction were granted was a relevant fact, as was the fact that a number of the defendant’s employees would lose their livelihood, although in many cases that might well not be sufficient to justify the refusal of an injunction. Equally, the court was entitled to have regard to the fact that many other neighbours in addition to the claimant were badly affected by the nuisance as a factor in favour of granting an injunction. Further, the existence of a planning permission which authorised carrying on an activity in such a way as to cause a nuisance by noise could be a factor in favour of refusing an injunction and compensating the claimant in damages. That factor would have real force where it was clear that the planning authority had been reasonably and fairly influenced by the public benefit of the activity, and where the activity could not be carried out without causing the nuisance complained of.

However, even in such cases, the court would have to weigh up all the competing factors.” Lawrence & another v Fen Tigers Ltd & others [2013 Supreme Court: Lord Neuberger]

When a claimant takes common law nuisance proceedings, the civil court undertakes a balancing exercise, weighing up the factors in each case, with an overarching principle of reasonableness. These factors include:

Common law nuisance provides the remedies of interim and/or final injunctions, which require the defendant to cease the nuisance, together with damages (compensation) for the claimant’s loss of enjoyment of their property rights. However, in some circumstances, damages may be awarded in lieu of an injunction.

Statutory nuisance provides the alternative remedy of an abatement notice, which if breached incurs a criminal sanction. Enforcement for non-compliance under other environmental regimes also include criminal sanctions

What is a statutory nuisance?

The 11 categories of statutory nuisance

The statutory nuisance regime is set out in Part III the Environmental Protection Act 1990 (EPA 1990).

Section 79(1)(a) – (h) of the EPA 1990 lists the following categories of matters which can amount to a statutory nuisance: